28 May was the day in 2010 when I graduated from the college. Though the results were out a few days ago, but I got my 'Green Card' (something which one gets after completing all the formalities before leaving the college) on this very day, marking the end of my IITR life as a student. However, technically speaking, I had left my hostel/insti just after midnight and the date became 29th but since the official document was obtained on 28th, I prefer to remember/call this day as the day when I ended my undergraduate life! 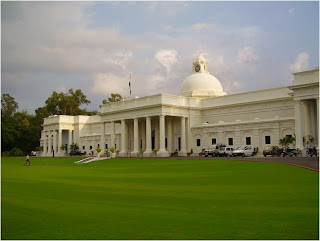 However, the purpose of the post is to review (though in brief) everything which happened after I left college. And here it goes:
May 29-31: The moment I left college (came out of the insti main gate) I felt some joy, instead of the tinge which should have been there for leaving a lovely place and a bunch of very good friends. The reason for this was the frustration which had crept inside me during the last few days of college, may be because of idiotic formalities, or may be because I wanted to be free soon and get into the real world. The next three days were spent in Delhi fighting the heat and waiting to go home.
June: Job Search, coolly in the beginning and a little more extensively in the later part of the month. A little disappointment over stumbling onto a job which I didn't want to do, not even join for a day. But I guess I had, by now, inculcated the habit of accepting things in life and getting over disappointments. However, I still long for the joy which my friends had after finishing college and before joining the corporate life. But probably one doesn't get everything in life. And when finally nothing happened, I left home to join Surya in the last week.
July: Getting adjusted to Surya life and the people over there in my group, though at times thinking deeply of what I was doing and regretting the day when I decided to sit for this company!
August: Getting fully in sync with the life at Jhinjholi (Surya Training Center), good friendship with people in my group, started liking the things which were going on, though by month end I had decided to quit soon.
September: Interesting time at Naturopathy camp and very boring time at Military camp!
October: Jhinjholi training gets over somehow after a lot of tantrums and hoopla. Industrial trip, problems with HR and resignation after a sudden outburst.
November: Home, Convocation, job offer from Evalueserve. But I had made up my mind to pursue my entrepreneurial desires and was almost ready to take up the content development project at PPES (Pardada Pardadi Educational Society). Went home after finalising every thing to convince my parents and have some rest.
December: Declination of Evalueserve offer, reluctance of parents about the PPES consultancy project and finally denial from PPES's side. However, this denial, though kind of betrayal from their side, made me happy as my parents didn't want me to work there. Puri Yatra happened in between, though I didn't enjoy the trip much. After all this, I was in a mood of not doing any work anywhere and stay at home, got into a bit of dreadful state of mind where nothing seemed clear and future looked blank!
January: Interviewed with Illumine Labs in Mumbai. Rejection! Got in touch with Asha volunteers, visited a few villages. Boredom because of nothingness to do. Went to Hyderabad with plans of going to Delhi after that to find a job.

February: Came to Delhi, felt homesick very badly once I set foot in the city. Got in touch with Nirmaan people. With the plans of working with them in Patna, ran away from Delhi asap. Boredom at home and wait for joining Nirmaan. Interview with KGVK in the last week.

March: Joined Nirmaan in mid march after many delays. KGVK people never called till this time meaning rejection. Nirmann life was not quite interesting. And finally one more betrayal (I suffered) and bye bye to Nirmaan! Came back to Delhi, though this time feeling dejected and defeated!

April: Job search, applications at many places! Nothing happened, nobody called except for the LAMP fellowship guys! LAMP people call back asking for documents.

May (till today, 28th): Took  time to make up my mind for LAMP fellowship and sending in the documents, and even telling the family about this. Meanwhile, joined Pratham. Met a few interesting people and having good time over there!

Life has not been very easy or the way I thought it would be during the past one year, but it certainly was interesting! Learnt a lot from the University of Life! Hope the lesson continues! :-)
Posted by Ashish at 2:28 PM 3 comments:

Email ThisBlogThis!Share to TwitterShare to FacebookShare to Pinterest
Labels: Memories

Education: Something has to be Done

It was Sunday night and after two days of loss of appetite and skipping the lunch before in the day and with a maddening headache, I felt a few rats in my tummy getting up from a hibernation and starting to yawn. Feeling happy at this regain of little appetite after a long period of around 51 hours 45 minutes and 27 seconds, I asked Sanket to go out and eat something. And hence we moved to the mess near his apartment to eat some 'light home-made kind of' food. As we sat on the bench of the mess, I saw Sanket waving to a guy sitting on the nearby bench. And all of a sudden this guy asked me whether I was an IITian. I was startled a bit but then realized that he might have known about Sanket eating there regularly and hence would have guessed that I too was from an IIT.

After that, this guy started asking me about which place I worked, how much I earned, why was I not working in MNCs like Google, MS and others or Indian biggies like TATA or Reliance, which coaching institute did I go to. Now, with a mind boggling headache torturing me, I was on on the least of ease to answer any of his questions. And then, he started telling me about what he was doing (medical aspirant) and why he was doing that (because he feels that now-a-days its tougher to get into an engineering college than a medical college). And after that, he again started repeating the same questions about my job which I had left unanswered. This was the time I realized that there was something wrong with this guy. And then I started ignoring his questions and whatever he was speaking. Later when I inquired about him to Sanket, I was told that the guy is preparing for medican entrance examinations and is disturbed mentally. Though the level of disturbance was only at the psychological level now, as it seemed, it is certain to reach a more dangerous state. In addition to that this guy lives in Delhi all alone, with no one to talk to him, console him, guide him, bring him back to normalcy.

And then we talked about so many medical and other aspirants who, after starting the preparation, take that as a larger than life aim. And how failing there repeatedly disturbs the mental make up of any person so badly. I hope our school system could do something to address this problem of 'taking things too seriously' or 'not accepting failure with ease'.

Another incident happened yesterday in office when I saw the SOPs of two MBA graduates of a reputed university in the country, which they had sent as a part of job application. To my utter dismay, in the name of SOPs, they had sent their resumes in a different file format. So when the MBA grads of such a big university don't know the meaning of SOP and didn't bother to or couldn't think of googling the word before sending it for a job application, I am left wondering what would be the condition of graduates in the shops mushrooming around us which sell MBA degrees!

And what makes me wonder is how we can upgrade the condition of education in our universities! What does it take to make a better university? And how does one get better teachers teaching at our colleges?

Email ThisBlogThis!Share to TwitterShare to FacebookShare to Pinterest
Labels: Education

Oh No! I am Serious!

Those who know me well know that they cannot associate seriousness with me. I am never serious and will never be, not even if the ruling party decides to declare me as the running candidate for the next presidential elections. Or wait, did I say I am never serious? No, actually I am serious whenever I hear of somebody giving a chapo (treat) or free food being distributed anywhere. Apart from that, nothing can awake me from my laziness and sleepy mode. And I not only take things in my life casually, but also I speak very casually whenever I try to open my mouth (Opening my mouth is something which I try very often, if not to speak then to eat). I bet if anyone can point out a conversation when I was seriously talking and thinking before I spoke anything would get a free water bottle from me (because I can see many of them lying in front of me at this time, thanks to no kaamwali bai coming).

At times, I realize that this attitude of mine has helped me a lot at many places in life. Being non serious with life, career (remember, it's a 19th century innovation and I don't want one), or anything else has kept me at peace and prevented me from being mad, and running madly after things, recognition, money and what not. My non seriousness with speech has, at times, created problems as new acquaintances find it difficult to get along with what I say without realizing that I don't really mean what my words intend to mean. But in the longer run and with people who know me well, I get the freedom and liberty of speaking anything without thinking whether the person in front of me likes to hear that or not. At least I am assured that his or her feelings won't be hurt as he would not take my words seriously. Waise bhi, I think that everything around us in life is so serious that we need to be very light hearted and non serious about anything happening around to cope up.

Some of my friends say, that I am still a kid; not mature enough to understand the gravity of any situation, immature to understand how the big bad world behaves. But I see everything as a small incidence, a combination of thousands of which make up any life. Do I need to give a 'larger than life' importance to any of these tiny events? I am baffled and believe me, I am baffled seriously.

P.S. Happy Mother's Day! Thanks to my mother for teaching me the difference between good and bad; and giving me the strength to chose good over bad no matter how painful the process and the result might be. Thanks to my parents in general for taking care of me so well.

They visited my blog before you!